In this video we want to discuss the different types of Stereoisomerism in Organic Chemistry.

Stereoisomers have the same molecular formula and structural formula so they are very similar in terms of physical and chemical properties.

However the arrangements of atoms in space is slightly different, so stereoisomers are different compounds.

We can treat stereoisomers like a pair of identical twins who look and behave in very similar ways but of course they are different persons.

There are 2 different types of Stereoisomerism: Cis-Trans isomerism and Optical isomerism. 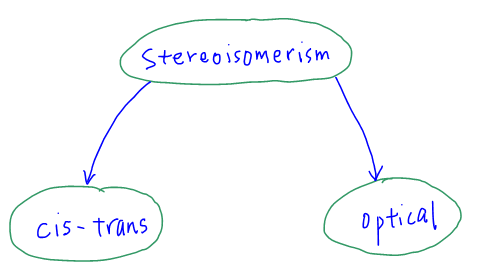 Cis-trans isomerism or geometric isomerism occurs for alkenes where each of the alkene carbon is bonded to two different groups.

Let's use but-2-ene as an example.

We notice each of the alkene carbon is bonded to a methyl group and a hydrogen. Since the groups are different, but-2-ene will be able to exhibit cis-trans isomerism.

To show the stereoisomers we need to draw the actual shape with respect to the alkene carbons which is trigonal planar.

The cis-isomer is when the bulkier methyl groups (with bigger molecular mass as compared to hydrogen) are on the same side. 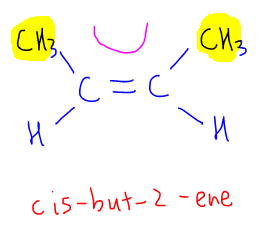 Notice the bulky groups and the C=C bond forms a 'C', hence this will be the cis-isomer, cis-but-2-ene.

The trans-isomer is when the bulky methyl groups are on opposite sides. 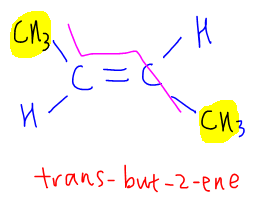 Notice the bulky groups cut across the C=C bond, hence this will be the trans-isomer, trans-but-2-ene.

Let's use butan-2-ol as an example.

The second carbon is attached to 4 different groups (ethyl, methyl, hydrogen and -OH). Hence it is chiral and we can use an asterisk (*) to annotate a chiral carbon.

When the compound has a chiral carbon, its mirror images are non-superimposable hence they are different compounds and exhibit optical isomerism.

The only different physical property of optical isomers is in their optical activity.

Both optical isomers can rotate plane polarised light to the same extent but in opposite directions.

For the detailed step-by-step discussion on how to draw cis-trans isomers and optical isomers, check out this video!

Join my 1000+ subscribers on my YouTube Channel for new A Level Chemistry video lessons every week.

Do consider signing up for my JC Chemistry Tuition classes at Bishan or online chemistry classes!