In this video we want to discuss the concept of expansion of octet rule.

When we draw dot-and-cross diagram of a molecule we often encounter the situation when the central atom expands octet or have more than 8 electrons around its valence shell.

Which are the elements that are capable of doing that?

An element from Period 3 and below will be able to expand octet by making use of its energetically accessible, or low lying d-subshell for bonding.

This means only Period 2 elements such as C, N, O and F cannot expand octet and have to obey octet rule. Take note octet rule is the exception and not the norm, as most of the elements in the Periodic Table are Period 3 and beyond, so therefore can expand octet if necessary.

Let's consider the electronic configuration of oxygen, a Period 2 element. From the electron-in-box diagram we can see that oxygen has 2 unpaired electrons so can form 2 covalent bonds.

How about sulfur, the Period 3 element directly below oxygen? 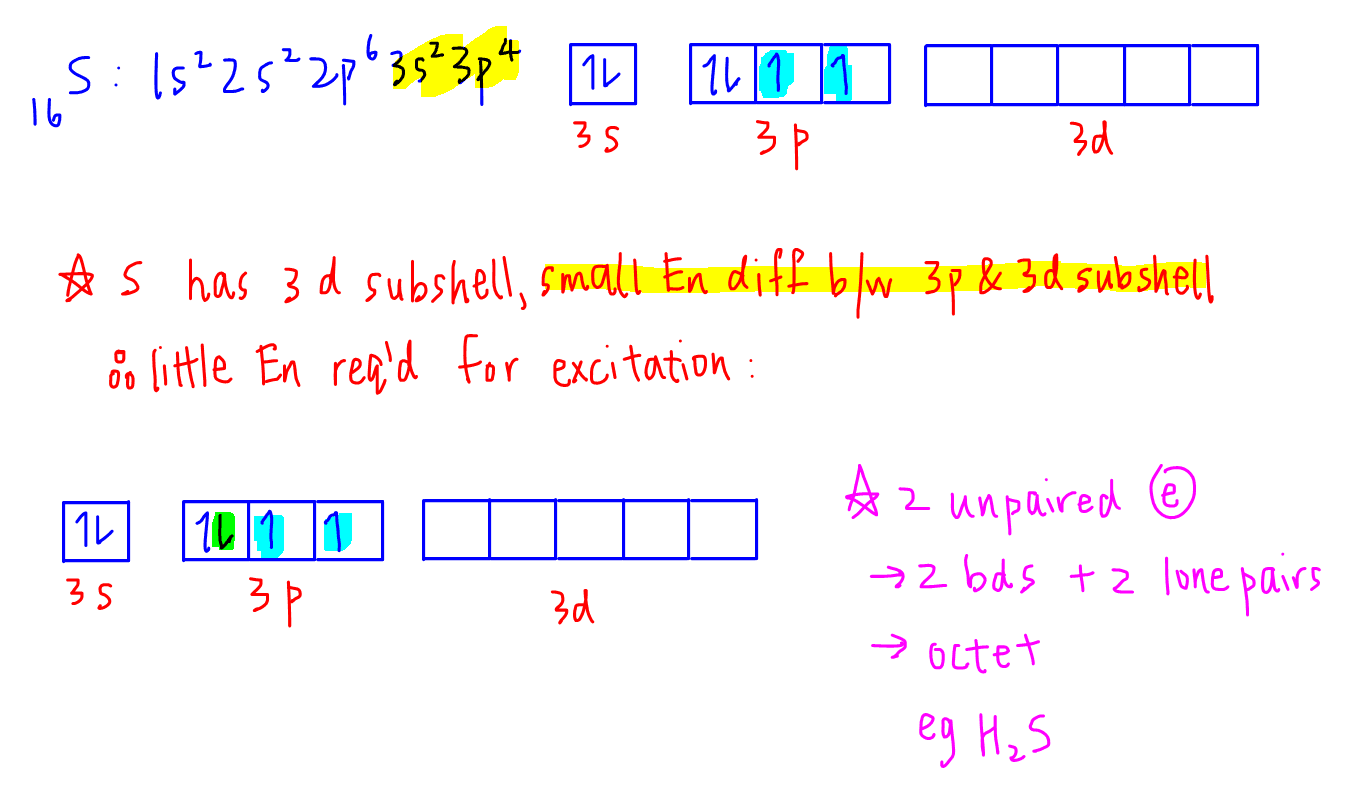 Notice that for sulfur it has 3d subshell which is very close in terms of energy level as compared to 3s and 3p subshells since they are all in the same principal quantum shell.

Sulfur can make use of its 2 unpaired electrons to form 2 covalent bonds plus the 4 electrons from its 2 lone pairs to give a total of 8 electrons.

This process is called excitation since 3d subshell is higher in energy hence energy is required to move an electron from 3p to 3d subshell.

Since the energy difference between subshells in the same principal quantum shell is small, it requires very little energy for excitation to take place.

After excitation we can see that there are now 4 unpaired electrons which means sulfur can now form 4 covalent bonds plus 1 lone pair which will give a total of 10 electrons in its valence shell.

Since sulfur now has more than 8 electrons, we say that it "expands octet".

Sulfur has one more electron pair in its 3s subshell so it can undergo excitation one more time and place the electron in another empty 3d orbital.

Now sulfur has 6 unpaired electrons which means it can form 6 covalent bonds to give a total of 12 electrons around its valence shell.

So in addition to being octet, sulfur can expand octet to have 10 or 12 electrons.

The driving force for excitation is the unpairing of electrons will allow the element to form more covalent bonds, hence more energy is released from the formation of more bonds, and the final configuration will be more stable.

So why wouldn't Period 2 elements such as oxygen undergo excitation?

This is because the next available orbital for unpairing of electrons is in 3s subshell, which is in the next principal quantum shell.

The energy difference is too big and it requires too much effort for oxygen to unpair its electron and promote it to the 3s subshell.

Hence oxygen and other Period 2 elements do not use orbitals in the third principal quantum shell for bonding and cannot expand octet.

For the detailed step-by-step discussion on how Period 3 elements expand octet, check out this video!

Join my 1800+ subscribers on my YouTube Channel for new A Level Chemistry video lessons every week.