Simple molecules have weak forces of attraction between them hence their melting and boiling points tend to be much lower as compared to other substances such as metals, ionic compounds and giant molecules.

There are 3 types of intermolecular forces namely:

Let's go through the factors affecting Hydrogen bond in this video, which are extensiveness and polarity. Extensiveness is related to the maximum number of hydrogen bonds a molecule can form with its neighbours. 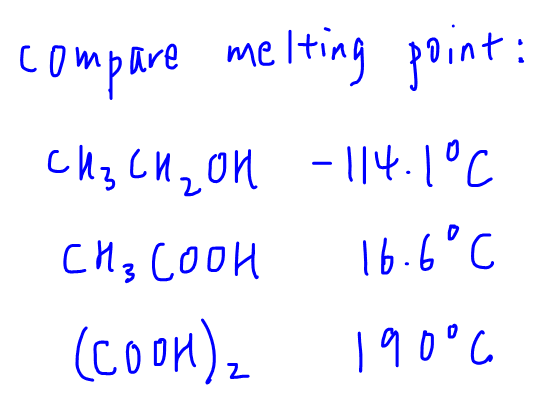 We can determine the maximum number of hydrogen bonds formed for each molecule by drawing out their lewis structures.

We can determine that ethanol can form a maximum of 3 hydrogen bond only, hence hydrogen bond is least extensive, least amount of energy required to overcome and melting point is lowest.

Ethanedioic acid can form a maximum of 10 hydrogen bonds which is the most extensive, greatest amount of energy required to overcome hence it has the highest melting point.

When extensiveness is the same, then we can compare polarity of H-F, H-O and H-N bond to deduce the strength of hydrogen bonds.

H-F bond is the most polar hence hydrogen bond between HF molecules will be the strongest.

H-N bond is the least polar hence hydrogen bond between molecules that contain H-N bonds will be the weakest. 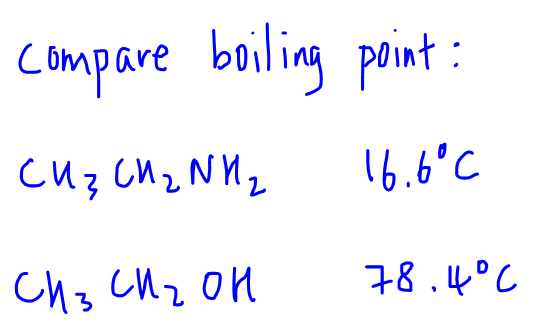 In this case both ethylamine and ethanol can form a maximum of 3 hydrogen bonds each, hence their extensiveness is the same.

Therefore we have to look at polarity to compare their boiling points. For the detailed step-by-step discussion on how to apply factors affecting hydrogen bonds, check out this video!

Join my 2000+ subscribers on my YouTube Channel for new A Level Chemistry video lessons every week.