Markovnikov Rule, which states that hydrogen will be added to the carbon with more hydrogen, can be used to predict the major product of this reaction.

Take for instance this alkene: 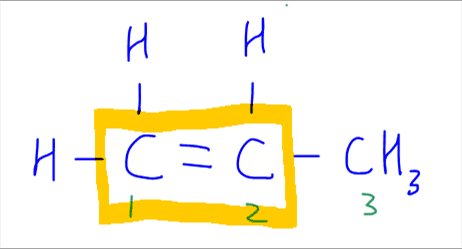 We notice that the alkene is asymmetrical as carbon-1 and carbon-2 are bonded to different groups.

Therefore if we add HBr to this alkene, 2 possible products can be formed.

Hence according to Markovnikov Rule, when hydrogen is added to the carbon with more hydrogen, we will get the major product. 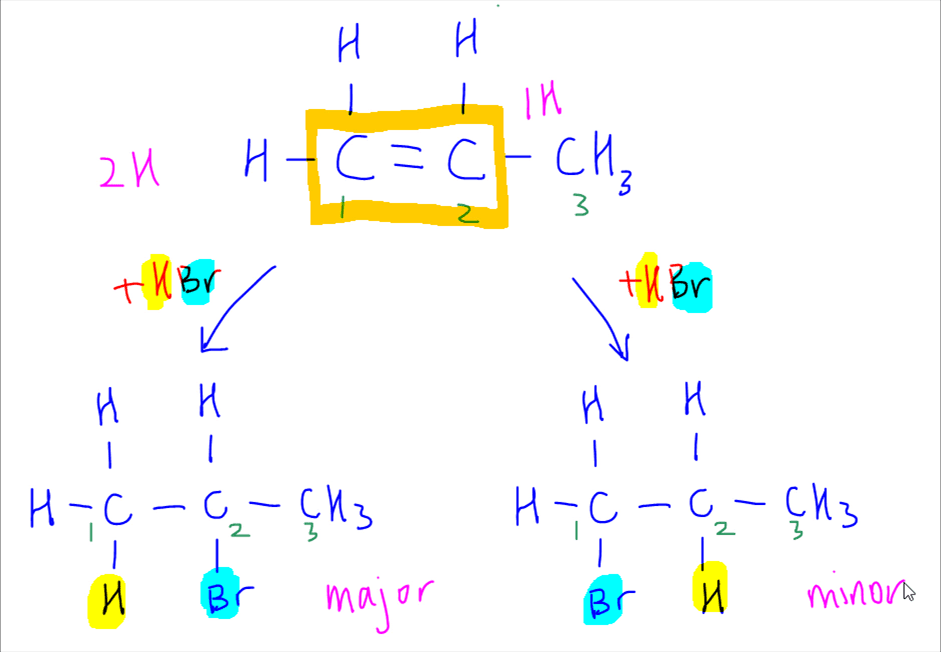 In the first step, electron rich alkene will attack hydrogen of HBr which is partial positive charge. Two possible intermediates can be formed as the alkene is asymmetrical. For the structure on the left: when hydrogen is added to carbon-1 with more hydrogen, the carbocation intermediate (on carbon-2) formed is bonded to 2 electron donating alkyl groups.

More electron donating groups will stabilise the carbocation to a greater extent.

For the structure on the right: when hydrogen is added to carbon-2 with less hydrogen, the carbocation intermediate (on carbon-1) formed is bonded to only 1 electron donating alkyl group.

Less electron donating groups will stabilise the carbocation to a smaller extent.

Hence it is less stable, less likely formed and becomes the minor product.

Check out this video lesson to learn how to determine major product for alkene addition reactions using Markovnikov Rule, and learn how to compare stability of carbocations!

I have a huge collection of short video lessons that targets important H2 Chemistry concepts and common questions.

Join my 3000+ subscribers on my YouTube Channel for new video lessons every week!

You can also view other A Level H2 Chemistry videos here at my website.

My weekly classes in Singapore are ideal for students who prefer a more structured program.

Build a strong foundation and ace your exams!

Sign up now for a trial lesson at $50 only (half price promotion)!

Register now and enjoy a promotional locked-in rate of $360 for a four-week month and $450 for a five-week month!

Check out the class timing and topics covered for our popular JC1 Classes and JC2 Classes at Bishan, Singapore.

Find out more information about our online tuition.